Community Association Viewed as a Business for Maintenance Liability 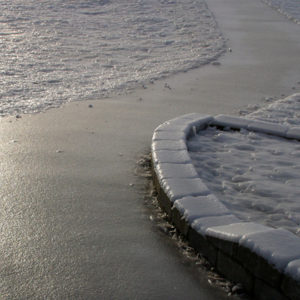 In December of 2008, a snowstorm with freezing rain led to the accumulation of less than 2 inches of ice on the sidewalks and streets of the community. The landscape contractor, at the request of the association, salted the roadways but the contractor was not requested to salt the sidewalks and they were not salted or cleared. Two days later, additional freezing rain occurred. The landscape contractor did not apply any salt to the roadways or sidewalks that day. That afternoon, plaintiff and her husband walked through the community and the plaintiff slipped and fell on ice on a common area sidewalk within the community and was injured.

The plaintiff sued the community association among others for the personal injury that she suffered. The lower court granted summary judgment dismissing the case against the community association and the management company. The lower court reasoned that the private, common area, residential sidewalk was the same as the residential public sidewalk for which the court conferred immunity in an earlier case
(Luchejko v. City of Hoboken) decided in 2011. The Qian plaintiff did not like this result so she appealed the decision. The Appellate Division affirmed what the lower trial court had done dismissing the case against both the association and the management company, but did not issue a published decision. Still unhappy that her case remained dismissed, the plaintiff appealed further to the New Jersey Supreme Court. Upon review, the Supreme Court reversed the two lower courts’ determination regarding immunity and reinstated plaintiff’s complaint against the homeowners association and the management company.

Thus, an owner of private property always has a duty to exercise reasonable care to protect those entering the property from dangerous conditions on the property. The Court’s decision makes clear that a duty exists to make private sidewalks and walkways reasonably safe and to the extent reasonable, to clear snow and ice that presents a danger to known or expected users of the sidewalks. Whether a sidewalk is public or private depends on who owns or controls the walkway. A critical factor in determining whether a sidewalk is public is whether the municipality has sufficient control over or responsibility for the maintenance and repair of the sidewalk. In the case of the homeowner association in the Qian case as distinguished from the Luchejko case, it was clear that the homeowners association had control over and responsibility for the maintenance and repair of the sidewalk, not the municipality.